“If your thought when seeing a woman in a bikini is, “she dresses like a whore”; your mind is in need of greater sanctification than that woman. Jesus had actual prostitutes washing his feet & his thought was *beloved image bearer*.” @kylejhoward_

There’s a backstory to this and if you spend any time on twitter you’re probably familiar with it. Basically, a pastor used the word “whore” when describing a woman who chooses to wear a bikini in public.

To say I learned a lot this weekend would be an understatement. I learned what a “white knight” is, I learned about antinomians, and frankly, I saw a lot of hurt people. What I didn’t see was a lot of comments from men who were “saved” by purity and modesty. What I DID see were the comments from woman who were damaged by purity and modesty culture. I don’t like the terms “woke” and now “white knight” because it’s easy to label someone that way and then justify disregarding anything they say. Despite that, I’m observing that woman are saying this kind of thinking around purity and modesty has damaging effects. We should probably look into that right?

For context, I didn’t grow up in the church. My wife and I both grew up in Las Vegas and weren’t a part of the purity culture that apparently was really big in the 90’s. We married very young (barely 20) and have really enjoyed our life together over the past 24 years.

Also for context, as a middle-age man when I go swimming it’s usually with my wife and kids at a variety of local family pools. There are women wearing bikini’s – young girls, mom’s, grandma’s etc. We’re there to swim. I don’t think anyone is served correctly by being labeled as whores for wearing a bikini at a family pool.

I think what stood out to me with the tweet from Kyle is the idea that *our* minds are the ones that need to be sanctified. My responsibility if a woman is “causing me to lust” is not to correct her behavior but to correct my own. If I have a problem that is caused by the environment I’m in – maybe I don’t need to be in that environment.

I don’t think anyone is properly served by being labeled a whore. Why do we have to be so caustic with each other? 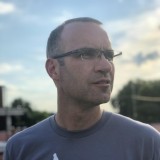